MANILA, Philippines — Amid China’s activities in the West Philippine Sea, about seven in 10 Filipinos have about Beijing’s growing military power, according to a Pew Research Center survey.

The poll found that 71% of Filipinos said China’s growing military is a bad thing for the country while 24% of respondents said it is good.

The survey released last week showed that Asia-Pacific countries, including the Philippines, are more wary of the effects of a strong Chinese military to their country. 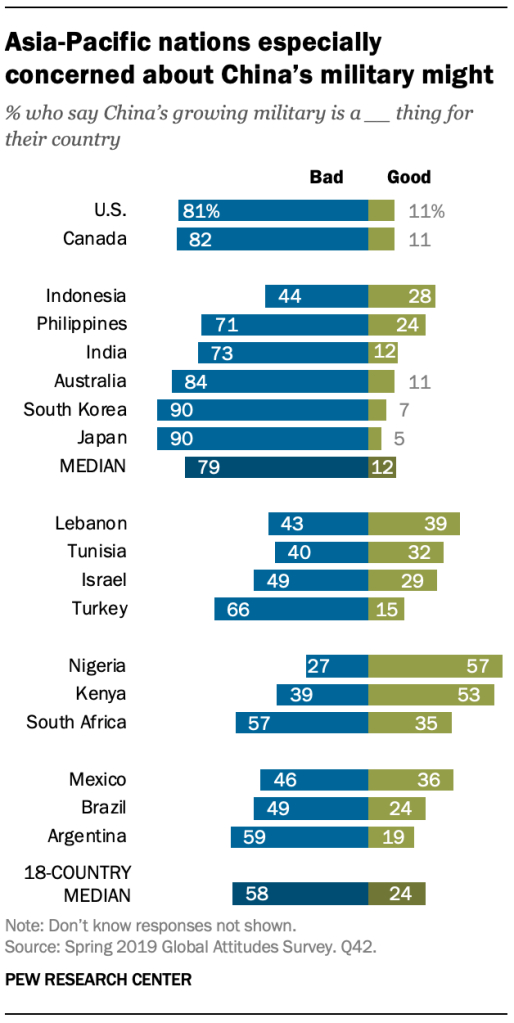 Japan and South Korea registered the highest concern China’s military might with 90%, while Australia and India scored 84% and 73%, respectively.

Among the countries surveyed in the Asia-Pacific region, Indonesia scored the lowest concern China’s military with 44%.

“China’s Asia-Pacific neighbors are especially doubtful about the effects of a strong Chinese military on their country: Among the six countries surveyed in the region, a median of 79% say China’s growing military might bad for their country,” the survey read.

Worry on China’s growing military extends across the Pacific with 81% of Americans and 82% of Canadians saying it is a bad thing.

China had installed electronic jamming equipment, anti-ship cruise missiles and surface-to-air missiles on its artificial islands in the group, which the Philippines also claims.

Earlier this year, China’s defense minister Gen. Wei Fenghe stressed that Beijing has every right to deploy troops and build weapons on islands and reefs it claims in the disputed South China Sea, including the West Philippine Sea.

“It is the legitimate rights of a sovereign state to carry out construction on its own territory,” Wei told an international security forum in June.

The same Pew survey found that Filipinos prefer having strong economic ties with the US rather than China. The poll found that 84% of Filipinos identified Washington as the world’s leading economic power while 59% named Beijing.

According to the survey, those who identify the US as the world’s leading economy are more likely to prefer stronger economic ties with it.

In the Philippines, from May 25 to June 22 among 1,035 adult respondents using face-to-face interviews. The margin of error is at 4.3 percentage points.