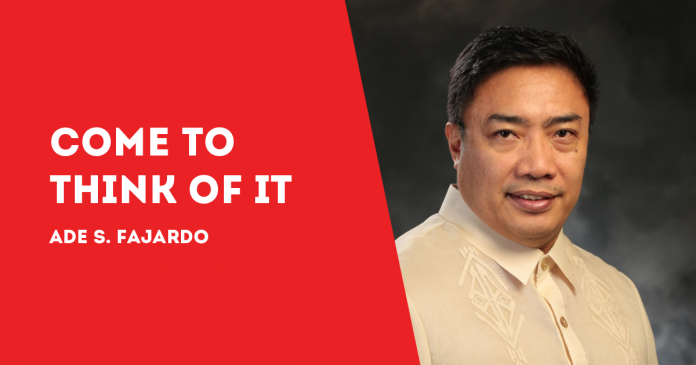 SENATOR Manny Pacquiao was heard in the radio explaining his vote against the resolution forwarded by Senator Franklin Drilon and others that opposed the Philippines’ withdrawal from the Visiting Forces Agreement with the United States of America.

This was before the nCovid became the maelstrom that it is now. Senator Pacquiao tried his best to put across his understanding of the principle in statutory construction, inclusio unius est exclusio alterius. Lawyers are taught that the express mention of one thing means the exclusion of another.

Statutory construction comes into play when there is doubt in the meaning of a law. When the law is clear and unequivocal, there is no need for construction. In this case, the boxer-Senator implied that there is such a doubt, and that the doubt should be resolved in favor of presidential prerogative to abrogate a treaty.

Senator Pacquiao sounded confident in his belief that the President’s action is valid because of the lack of a provision in the 1987 Constitution requiring the Senate’s participation in withdrawing from a treaty or international agreement.

This is in contrast with the explicit requirement of the Constitution that no treaty or international agreement shall be valid and effective unless concurred in by at least two thirds of all the Members of the Senate. Hence, inclusio unius est exclusio alterius.

The soundness of the Senator’s argument is now before the Supreme Court after most of the members of the Senate decided to formally question the legality of the withdrawal.

In the meantime, the abrogation of the VFA is in keeping with President Duterte’s distancing from our traditional allies like the USA.

But while China is loudly announcing its help against the corona pandemic, it is at the same time augmenting its presence in the West Philippine Sea. China has been deploying up to a hundred militia vessels from Subi Reef in order to monitor Philippine operations in the nearby Pag-asa Island.

Last week, China itself reported that its Academy of Sciences has launched two research stations on Fiery Cross (Kagitingan) and Subi Reef in Spratly Islands, ostensibly to help its scientists “expand their research into deep sea ecology, geology, environment, material sciences and marine energy.” Fiery Cross was transformed into an airbase in 2017.

We all know of China’s island-building activities on seven coral reefs, which includes Panganiban Reef, also known as the Mischief reef. In February 2015, the Aquino government delivered a Note Verbale to China, strongly protesting land reclamation activities at Panganiban Reef.

The arbitral tribunal that eventually upheld the position of the Philippines also observed that since the end of 2013, China has created on top of the coral reefs approximately 12.8 million square metres of land, from millions of tons of dredged coral, rocks and sand.

The tribunal also discovered that this artificial island-building program is part of an official Chinese policy and program implemented by organs of the Chinese State.

In 2017, Greg Asner of CNN reported that this military base and outpost building has destroyed huge expanses of coral reef, which means that millions of its colorful lifeforms have been wiped off the planet, and that the vast majority of the loss in reef cover has taken place in just the past three years.

Government is required to enforce the laws of the Philippines, including those that seek to protect its maritime assets. For instance, the Philippine Fisheries Code mandates the “conservation, protection and sustained management of the country’s fishery and aquatic resources.”

Provisions of our Fisheries Code must be enforced in all Philippine waters including other waters over which the Philippines has sovereignty and jurisdiction, and the country’s 200-nautical mile Exclusive Economic Zone and continental shelf.

Is that being enforced in the West Philippine Sea? That law is clear and requires no interpretation.

Our politicians’ public pronouncements regarding the VFA may not be taken in isolation. They must always be understood in the context of an invasion being undertaken in stealth and strategy, as well as the invader’s estimation of who best can serve as the local vassal of least resistance./PN