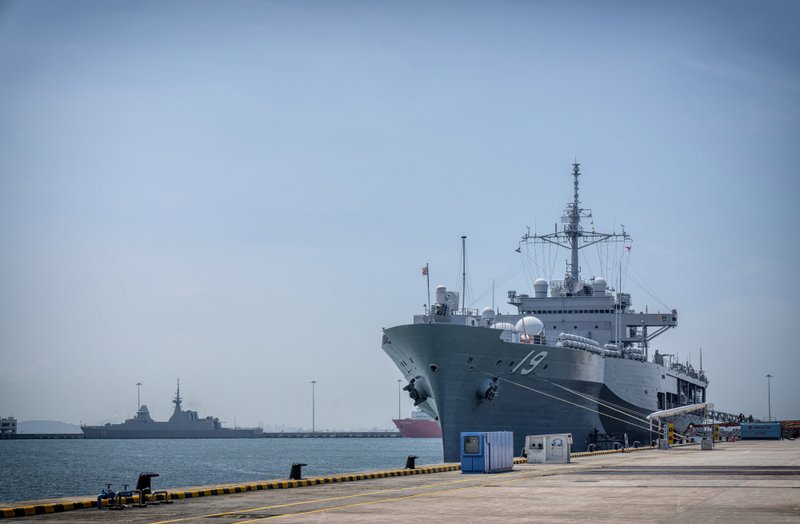 The voice on the radio in the middle of the South China Sea follows a familiar script for Capt. Eric Anduze, who helms the USS Blue Ridge. It’s China on the phone.

“They’ll contact us and they’ll go — ‘U.S. government vessel, this is Chinese Navy vessel’ number whatever — ‘we will maintain 5 miles from you and escort you as you make your transit,”‘ Anduze said, describing the English-speaking voice from a rival Chinese warship.

The U.S. response is short: “Chinese vessel, this is government vessel 1 9, copy, out.” From there on, silence, as the vessels of the world’s rival powers steam onward together.

The ship-to-ship interactions are a regular potential flash point for the world’s two biggest militaries in contested waters. In September, a Chinese destroyer sailed within a football field’s distance of the USS Decatur in what the U.S. said was an “unsafe and unprofessional” maneuver. That hasn’t deterred future sailings — the U.S. sent two guided-missile destroyers within 12 nautical miles of disputed islands earlier this month.

Based in Japan, the Blue Ridge is a frequent traveler through the South China Sea, which Beijing considers its waters against an international community increasingly concerned by its encroachment. The area is home to key shipping lanes and fisheries that have sparked disputes between China and its neighbors.

China has built up and mans artificial islands with buildings, communications towers, ports and runways to cement its claims in what many international observers say are military provocations. The U.S. says it travels the waters as if the expansive claims don’t exist, running through shipping lanes as the Blue Ridge does, or on so-called freedom of navigation patrols near the disputed islands. Those latter sailings are viewed by China as aggravating.

The U.S. Navy allowed media outlets, including Bloomberg, an inside look at the sort of ship it’s using to sail through the disputed waters. The oldest operational warship in the American Navy, the Blue Ridge is the flagship of the 7th Fleet, and docked in Singapore as part of a tour of Southeast Asian port cities.

The Blue Ridge is billed as one of the most technologically advanced ships in the world. It operates as a central information node for a fleet whose range stretches from the India-Pakistan border to the International Date Line in the Pacific Ocean. Through its several computers flow a database the Navy says gives it a “complete tactical picture of air, surface and subsurface contacts.” That’s what it does: it sails and it knows things.

The ship is a small floating town of more than 1,000 sailors at any given time. There are beds and cafeterias, fitness centers and a post office. A miniature hospital has sick beds and an operating room, along with a dentist who can fill a cavity or pull a tooth — unless the waves get too rough. Up on deck, sailors can jog on a makeshift track around the ship, at about seven laps to a mile.

Since February, Anduze said the Blue Ridge has been escorted by Chinese vessels about six times in an almost unremarkable and now routine manner.

In Washington, the view is that China uses “coercive tactics” including its naval and paramilitary vessels to enforce claims in the South China Sea, the Pentagon said last week in its annual report on China’s military power. Those are targeted “in ways calculated to be below the threshold of provoking conflict,” though have escalated into near-misses with U.S. warships.

Naval officials on the Blue Ridge declined to comment in detail on those more aggressive encounters, except to say nothing similar had happened with them as they passed through the South China Sea’s shipping lanes.