In the two-week confrontation that followed at the far southern end of the South China Sea, Indonesia deployed five warships, which joined two others that normally patrol the area, and four F-16 jet fighters. The orders from Jakarta: drive the Chinese away, but find a way to do it without escalating tensions, a military spokesman said.

The incident provides a window into how countries in the region are navigating confrontations with China’s fishing boats, law-enforcement ships and other vessels on the front lines of Beijing’s efforts to assert its claims over most of the South China Sea.

The Chinese fleets operate for long periods and at great distances from the mainland, stirring tensions with smaller countries in the region, including Vietnam, the Philippines and Malaysia. Their persistent presence and coordinated actions have made it risky for these countries to exploit natural resources off their shores, like fish or natural gas, effectively expanding China’s influence and shifting the balance of power.

Government and military officials in Southeast Asia say they frequently face tough decisions about how to push back and counter Chinese tactics without going too far. They must calibrate what kinds of ships to send, how many and what actions to authorize.

The risk, they said, is ratcheting up tensions that could give China an opening to wrest more control. These countries also see Beijing as an important economic partner and source of investment that they don’t want to antagonize.

An international tribunal ruled in 2016 that China’s broad claims to historic rights in the South China Sea have no legal basis. Beijing rejected the ruling, and has continued to strengthen its position, as it has over the past decade by building artificial islands, expanding economic influence and maintaining a presence in the waters it claims. 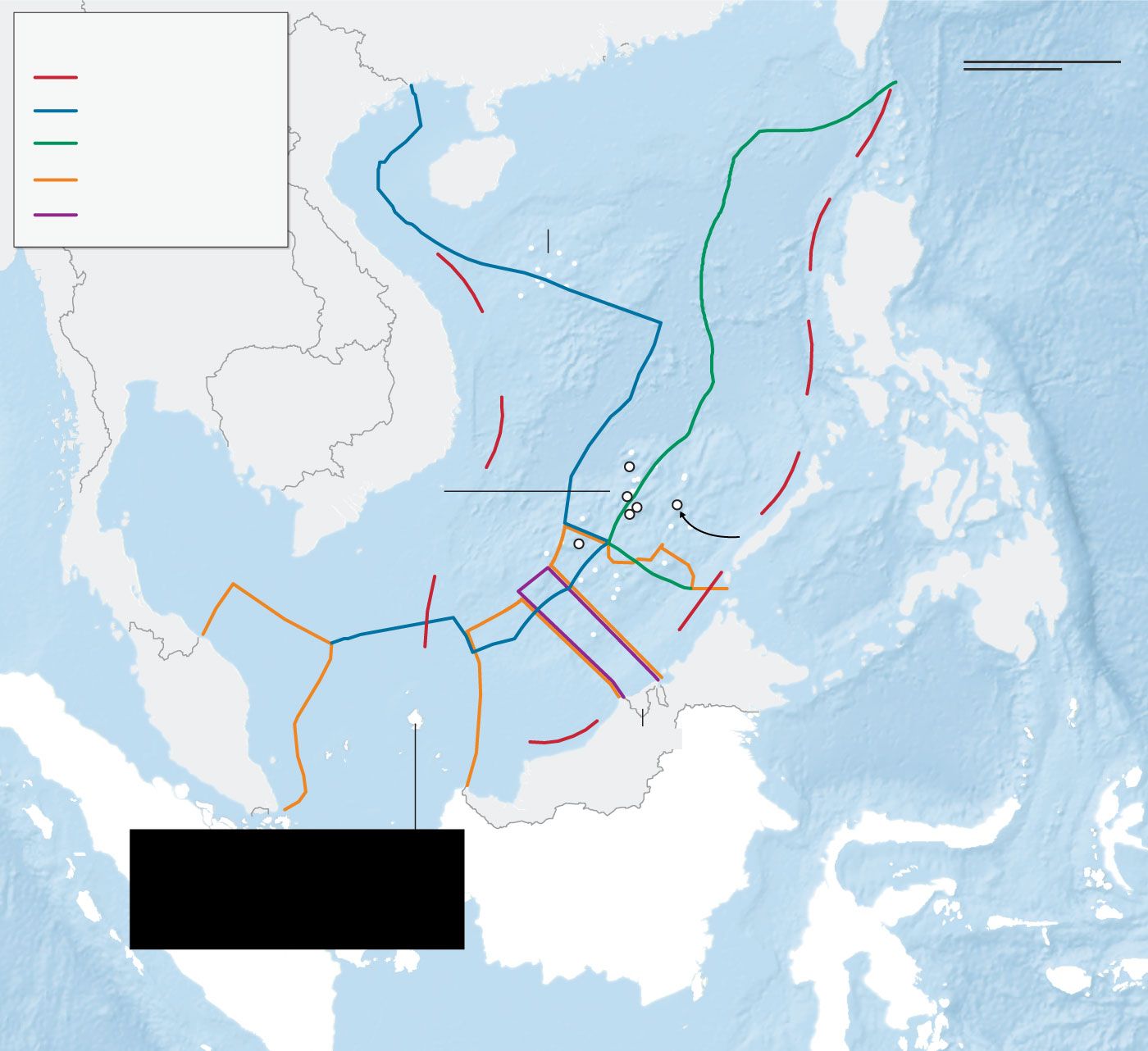 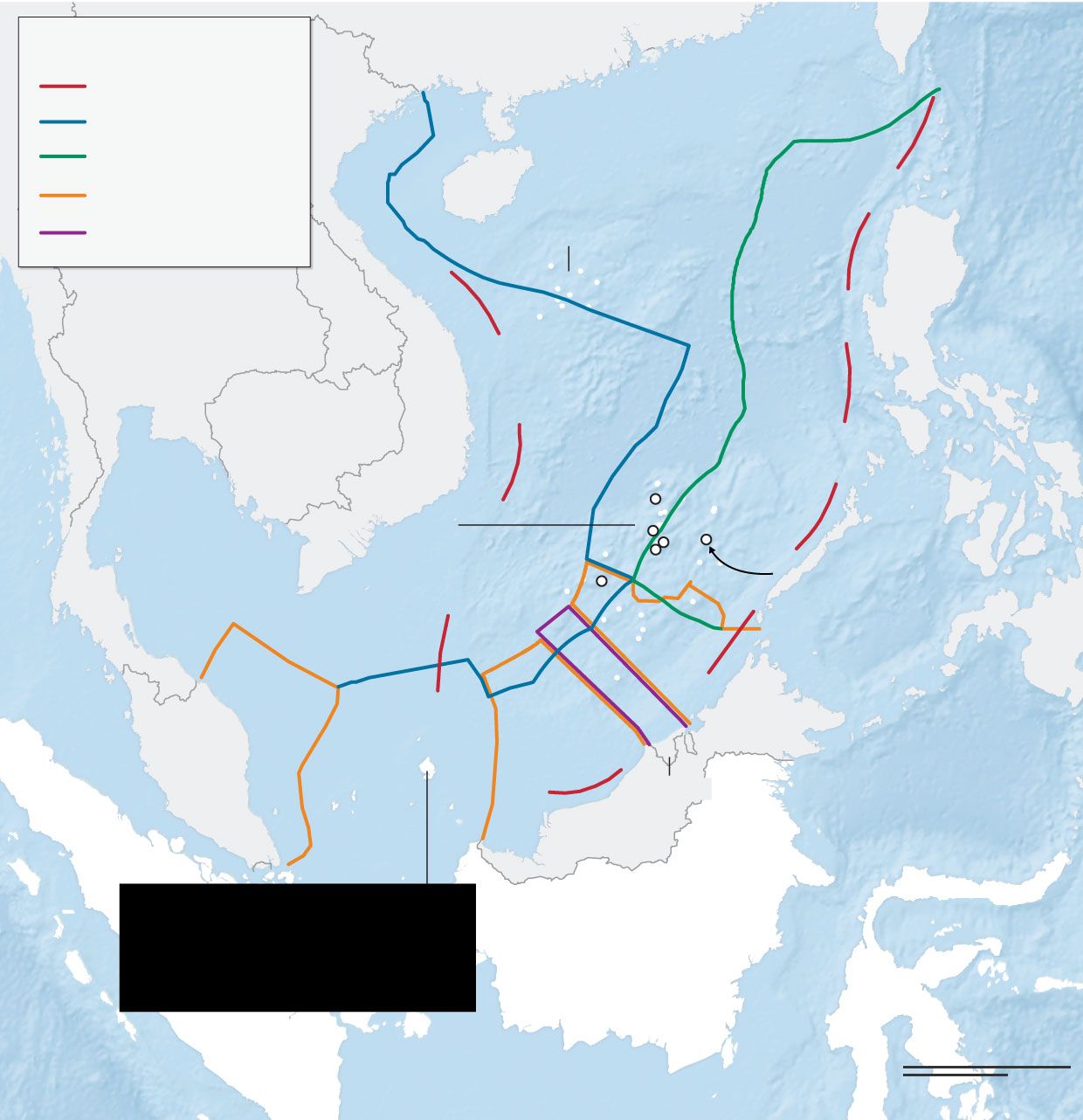 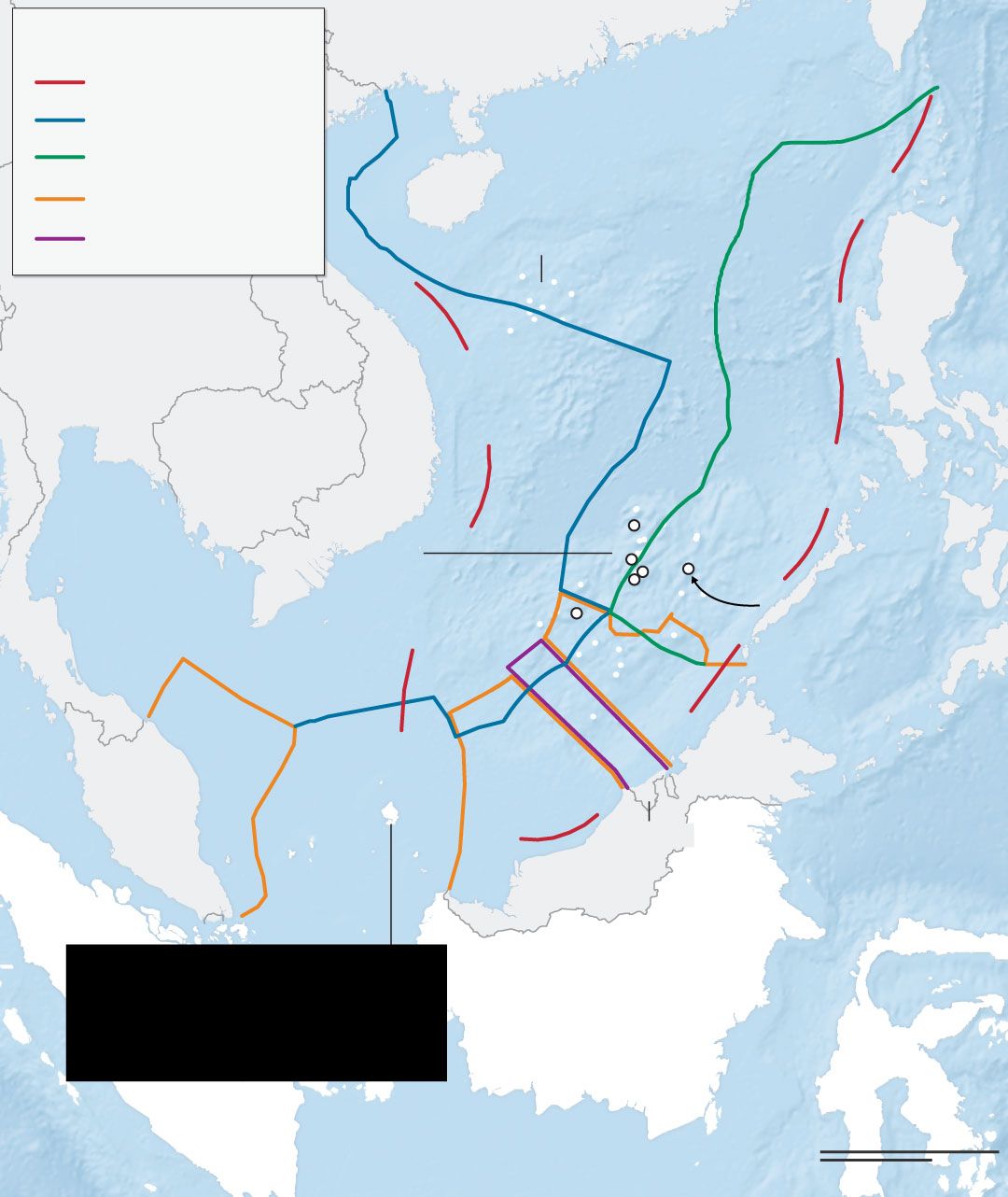 *Controlled by China, claimed by Vietnam and Taiwan

†Claimed wholly or in part by Brunei, China, Malaysia, Philippines, Taiwan and Vietnam

The U.S. accuses China of intimidating its neighbors and trying to enforce an unlawful maritime claim. It undertakes naval patrols, which it calls freedom-of-navigation operations, in the area to challenge China’s position. But many Southeast Asian officials and experts in Washington say the absence of a U.S. strategy in the South China Sea has eroded its credibility and strengthened Beijing’s hand.

Last year, a Chinese oil-and-gas survey ship protected by coast guard vessels operated for months off Vietnam, prompting repeated denunciations from Hanoi. Vietnamese officials said China’s actions were aimed at disrupting offshore drilling licensed by Vietnam. Beijing says no country or company may carry out oil-and-gas operations without its permission in waters it claims and said it had jurisdiction over the area its vessels were in.

For months in early 2019, Chinese fishing boats surrounded a Philippine-controlled island that China claims as its own, forcing the Beijing-friendly government in Manila to send a diplomatic protest. President

has generally avoided confronting Chinese vessels, citing the Philippines’ limited resources and saying he doesn’t want war. His critics say that strategy helps China without winning concessions for the Philippines.

China doesn’t claim Indonesia’s Natuna Islands, near which the recent flare-up occurred, as its own, but says it has historical rights over a part of the surrounding waters that falls within an ill-defined “nine-dash” line Beijing has used to demarcate its claims.

Those claims overlap with Indonesia’s 200-nautical-mile exclusive economic zone, an offshore area in which, under the United Nations Convention on the Law of the Sea, coastal states have the right to exploit natural resources.

“The notion that Indonesia should sit down with the Chinese and discuss these overlapping rights is a non-starter,” said

a senior researcher at the Jakarta-based Centre for Strategic and International Studies, adding that Indonesia doesn’t want to “even implicitly acknowledge” that China has a right to begin with.

How should nations enforce the 2016 ruling by a U.N. tribunal rejecting China’s broad claims in the South China Sea? Join the conversation below.

The Natuna Islands lie far north of the Indonesian capital Jakarta. The nearby waters were also the site of encounters between Chinese and Indonesian ships in 2016, in the months leading up to the ruling that rejected Beijing’s claims.

When Chinese ships arrived at the end of December, Indonesia lodged a protest with China’s ambassador in Jakarta—to which China’s foreign ministry responded that it had historical rights to fish there. The coast guard, Beijing said, was performing its duty by carrying out routine patrols and protecting the rights and interests of the Chinese people.

Indonesia said those claims had no legal basis.

Over the following week, seven Indonesian warships were pressed into the effort to try to drive out the Chinese ships—and, according to an Indonesian navy spokesman, signal that Indonesia was serious about protecting its sovereign rights.

But the operations were tricky, as the ships came close to one another, with the potential for collisions or accidents. At all times, three or four Chinese coast guard vessels encircled the cluster of Chinese fishing boats, said the spokesman,

Indonesia sent repeated radio messages that had been recorded in Mandarin, asking the Chinese to leave. The Chinese coast guard responded just as many times: “Do not disturb our activities.”

The Indonesian warships tried to approach the Chinese fishing boats to apprehend them and take them to shore to be prosecuted for illegal fishing. But each time they tried, a Chinese coast guard vessel would maneuver in front of them, forcing the Indonesian ship to rapidly decelerate to avoid a collision, Mr. Rohadi said.

The navy’s movements were cautious, he said, because it was mindful that an aggressive effort to seize the fishing boats could escalate tensions with the coast guard.

In Jakarta, government officials received daily reports on the status and talked to China through diplomatic channels. Some discussed longer-term plans to help hundreds of Indonesian fishermen from another part of the archipelago nation fish in the waters around the Natuna Islands as a way to have a presence there and possibly deter Chinese forays.

took a trip the islands, where he met with local fishermen. At sea, the ships continued to crisscross and Indonesia’s military flew F-16s overhead. On Saturday, the Chinese ships began moving northward, away from the area. The Indonesian navy shadowed them all the way out, and continued its patrols off the Natuna Islands for many days, Mr. Rohadi said.

“We wanted to make sure they are all gone, that no boat is left behind,” he said.

Write to Niharika Mandhana at niharika.mandhana@wsj.com