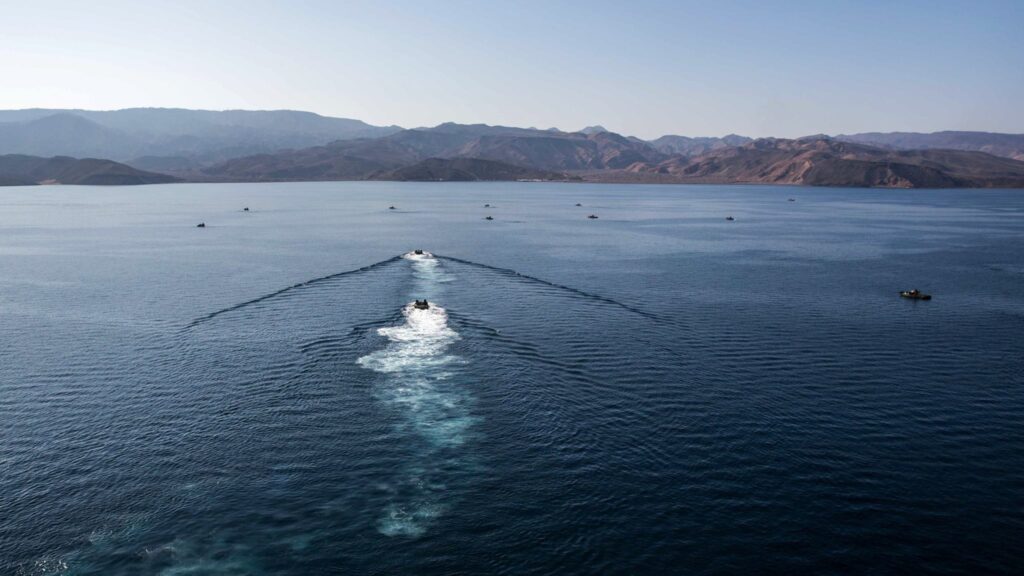 The 11th Marine Expeditionary Unit moves through the Gulf of Aden during an amphibious assault rehearsal.

WASHINGTON: The Navy might not yet have an overarching plan to design and build its fleet of the future, but it is taking small steps that provide clues as to where service leadership wants to go.

Over the past week, the Navy announced two industry days to meet with prospective shipbuilders for a new class of logistics ship that can operate under fire, and an unmanned anti-mine vessel, both new programs that would allow the Navy and Marine Corps to push deeper into contested territory in the Pacific, and keep troops and sailors resupplied once they get there.

The Next Generation Medium Logistics Ship is the bigger effort, representing an entirely new class of manned ship designed to operate in a crowded environment while supplying ships at sea and a new, lighter, Marine force on the ground that is currently being designed by Commandant Gen. David Berger.

A May 15 post on a government contracting website asked the defense industry for their ideas, explaining  that the Navy is looking for ships that are “smaller than existing ships in the Combat Logistics Force, and will operate near contested environments, sustaining afloat (Surface Action Group) and ashore (Expeditionary Advanced Base) requirements.”

The expeditionary advanced base idea is part of a wide-ranging overhaul of the Marine Corps to get lighter, faster, and more deadly by employing precision weapons the Corps hopes to integrate into its formations in the coming years.

Berger is working to stand up several Marine Littoral Regiments, with the first based in Hawaii and falling under the Japan-based III Marine Expeditionary Force. The first three regiments, designed to move fast and have anti-air and possibly anti-ship weapons, will be based in the Pacific region, pointing to where Berger and the Marines see the pacing threat coming from in the future.

Relying on smaller units armed with precision weapons that can operate inside the weapons range of an enemy, moving in tight waterways and using small islands to provide cover for naval air air forces is key to the emerging Marine Corps vision, which has its eye cast squarely on the South China Sea.

More broadly, Berger plans to lop off a significant portion of the Corps’ traditional strength — artillery, armor, and rotary wing lift — in favor of a leaner, more precise and much faster force. The Navy, conversely, while pledging to move forward with some unmanned ship plans, generally wants to retain its huge nuclear aircraft carriers, dozens of big deck amphibs, and an aging destroyer fleet while introducing a new frigate to the mix.

Not all  those ships would be able to move as far afield as the new Marine regiments, making support and resupply an issue, though a new class of frigates, which the Navy selected earlier this month, could possibly fit the bill. The small, multi-mission ships will be more maneuverable than Arleigh Burke-class destroyers and will come with the Aegis combat system, 32 vertical launch cells, the new SPY-6 radar system, and more power generation capabilities that will make it capable of sustaining new directed-energy weapons as they become available.

“I see it doing multiple things, this is going to be a real workhorse supporting distributed maritime operations in the future,”  Vice Adm. James Kilby, deputy chief for warfighting requirements and capabilities, recently said.

To supply those Marines ashore, the Navy believes there are several types of commercial vessels which may be able to perform these missions, but is also considering” conversion of existing vessels, new construction, or a combination of conversions and new construction in order to acquire the required number of Next Generation Logistics Ships,” the solicitation said.

On May 13, the Navy also announced a virtual industry day for the Mine Countermeasures Unmanned Surface Vehicle program, one of several unmanned efforts the service is planning to bolster the larger, manned fleet. “The purpose of this industry day is to improve industry’s understanding of how the MCM USV program fits into the Navy’s plans to expand the use of unmanned vehicles,” according to the notice, which adds the MCM “will be a ship-launched or shore-launched, open architecture (OA), surface vehicle capable of autonomous safe navigation and mission execution.”

The plans for both programs — and the frigate, as well — depend on what a study being helmed by Deputy Defense Secretary David Norquist finds in his look at the Navy’s Integrated Navy Force Structure Assessment, which the Pentagon blocked the Navy from releasing in February, as planned.

After being briefed on the plan for building a 355-ship fleet over the next decade, Defense Secretary Mark Esper told the Navy he was taking over the project, and putting Norquist in the lead of relooking the plan. It’s not clear what issues Esper had with the plan, but some officials and experts have speculated that the Navy isn’t moving fast enough to divest of older, larger ships in favor of smaller, faster and unmanned vessels.

Esper has said he expects the study to be complete by July.