U.S. informs Russia of plans to deploy intermediate-range missiles to Okinawa in the next two years, worrying some that the base burden will increase significantly 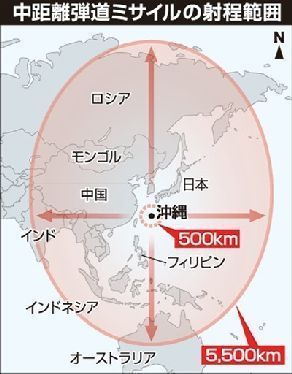 Range of an intermediate ballistic missile from Okinawa

After withdrawing from the Intermediate-Range Nuclear Forces Treaty (INF Treaty) on August 2, the U.S. announced that it would be deploying a large quantity of intermediate-range ballistic missiles, which were banned under the treaty, to Japan at locations that include Okinawa and Hokkaido.

Ryukyu Shimpo reporting has learned that the U.S. government informed Russia of this through back-door communications.

According to this communication, the U.S. is working with Japan to deploy the missiles starting at the end of 2020, through 2021.

If these missiles are deployed, base capabilities will be further increased, and there are fears that it increases the chances of Japan becoming entangled in a nuclear war. Furthermore, it will rapidly increase the base burden on Okinawa.

An expert with knowledge of U.S. military strategy indicates, “Okinawa has a strong possibility of being a deployment site, due to the large concentration of military bases there.

American media is also pointing to the possibility of deployment to Okinawa.

Military critic Testuo Maeda, who was familiar with the state of the U.S. military after the cancellation of the INF Treaty, indicated that PAC-3 air defense missiles are already deployed to Kadena Air Base, and may be added to or replace the Aegis Ashore ballistic missile defense system that is planned to be deployed to the Araya maneuvering grounds in Akita, and the Mustumi maneuvering grounds in the town of Abu in Hagi, Yamaguchi.

He also noted that making public the frequent visits of nuclear submarines equipped with new missiles to Yokosuka in Kanagawa, Sasebo in Nagasaki, and Uruma’s White Beach is big.

The end of the treaty gave rise to a “new cold war” as the U.S., China, and Russia start to develop new missiles, and the possibility is rising for Okinawa to once again be placed in the precarious state as the frontline, as it was during the original Cold War, when pre-reversion Okinawa hosted a large number of nuclear weapons.

However, due to local resistance and public opinion, it is still unclear if the Japanese government will consent to the deployment.

According to a representative for the Russian president, on August 26 a conference with the theme of a new strategy for Asia was held in Washington after the invalidation of the INF Treaty, and four countries, Japan, Australia, the Philippines, and Vietnam, were raised as possible deployment sites for new missiles.

South Korea is also an ally of the U.S., however it was excluded from the list as denuclearization talks between the U.S. and North Korea continue.

For deployment in Japan, Okinawa, Hokkaido, and mainland Japan were listed as possible locations, and among those it seems inevitable that the U.S. will deploy missiles to Okinawa.

The same Russian representative indicated that with the U.S. decision to increase their military presence in the Asia-Pacific region, there is a great possibility they will reaffirm the importance of the U.S. military bases on Okinawa.

They hypothesize that there may be limited naval conflict between the U.S. and China in the next 2-3 years over things such as the Senkaku and Spratly islands, and as such the U.S. will be giving a lot of attention to the capabilities of the current U.S. bases in Okinawa.

Okinawa is far south of Russia, if missiles are deployed to Japan Russia’s eastern seaboard will be in range, and it is thought that this would wipe away any progress made in the negotiations over the disputed northern territories as well as the execution of a Russo-Japanese peace treaty.

The U.S. has maintained to Russia that their deployment of new missiles is meant to keep China in check, and explained that Russia has no need for concern.

However, Russia has taken this as a new threat, and they have stated that as part of their plans for new defense systems, if the missiles are deployed, “Russian missiles will be pointed in that direction.”

The new missiles being developed by the U.S. are a new tomahawk missile that can be loaded either into a vehicle or submarine, either of which can be equipped with a nuclear warhead. The payload can be anywhere in the 10-50 kiloton range, the lowest power being equal to the nuclear bomb that was dropped on Hiroshima (12 kilotons).

There is doubt that this deployment will be in compliance with Japan’s three non-nuclear principles.

In response to questions from the Ryukyu Shimpo about the existence of a deployment plan, the U.S. State Department referred questions to the U.S. Department of Defense, who after two days has yet to respond to any questions.

Next Article:Russian government officials and mayors making advances toward Okinawa