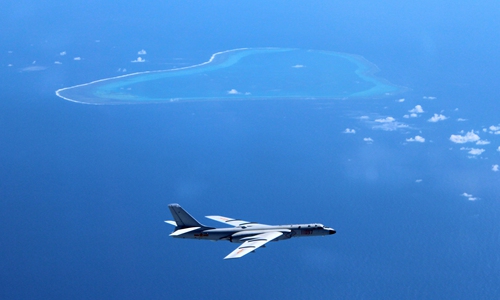 US warships, regardless of their large displacement and advanced technologies, are actually “paper tigers” in the South China Sea, as China’s People’s Liberation Army (PLA) has the overwhelming advantage there, military experts said on Saturday after the US once again sent naval vessels to the South China Sea days after Chinese armed forces expelled a US warship that illegally entered the waters.

The US amphibious assault ship America and littoral combat ship Gabrielle Giffords sailed together during operations in the South China Sea on Friday, the US Pacific Fleet said on its Twitter account on Saturday.

An amphibious assault ship, loaded with short takeoff and vertical landing (STOVL) fighter jets in addition to helicopters, is a type of large surface vessel with a flat flight deck, often seen and used as a small aircraft carrier, analysts said.

And, F-35B STOVL stealth fighter jets are seen taking off from the amphibious assault ship in a photo the US Pacific Fleet released with the tweet.

“Although it looks like the US amphibious assault ship is very powerful as it has a large displacement and can operate F-35Bs, but can it really land on an island or reef in the South China Sea? Can its F-35Bs actually fight anything? [No,] the PLA has full control over the South China Sea,” Song Zhongping, a military expert and TV commentator, told the Global Times on Saturday.

The same goes for the littoral combat ship: seemingly advanced, it is only lightly armored and is operating in a small group, Song said, noting that the US vessels could be easily outnumbered.

The US operation on Friday came after the PLA aerial and naval forces expelled the US guided missile destroyer McCampbell, which trespassed into China’s territorial waters close to the Xisha Islands in the South China Sea, on Tuesday.

The US side is using “freedom of navigation” as an excuse to repeatedly enter the South China Sea to flex its muscles and cause trouble, which are acts of hegemony that violate international law threatening peace and stability in the region, PLA Southern Theater Command spokesperson Li Huamin said on Wednesday.

“[The US’ operation on Friday] is another typical ‘freedom of navigation’ operation by the US, but it is clearly pointed towards China, particularly China’s Nansha and Xisha islands in the South China Sea,” Song said.

The US is attempting to deny China’s sovereignty over the islands in the South China Sea, showing military presence and supporting other countries in the region that are illegally occupying Chinese islands and reefs, Song said.

“China will do its best to safeguard peace in the South China Sea, but if any country from outside the region is determined to stir up trouble, the Chinese military will not fear a fight,” Song said.