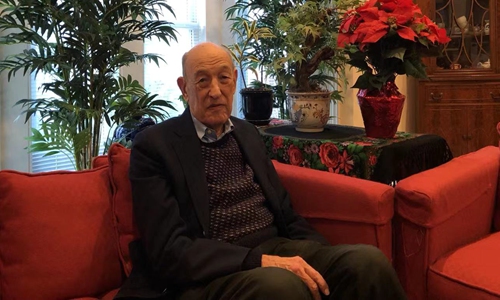 Ezra Feivel Vogel, Professor Emeritus at Harvard University, has written a number of masterpieces on Japan and China, such as Japan as Number One: Lessons for America, and Deng Xiaoping and the Transformation of China. Last summer, amid escalating tensions between the US and China, about 100 scholars, diplomats, business people and military experts of the US signed an open letter – “China is not an enemy,” calling for reexamination of US policy toward China. The 90-year-old professor was among them. How does he analyze the current US policy toward China? Is there any possibility that the two countries will decouple? Vogel (Vogel) shared his insights in an exclusive interview with Global Times (GT) special reporter Wen Yan.

GT: Many scholars believe that US containment of China has already gone beyond partisanship. But you said “there is no Washington consensus about being tough on China.” Why?

Vogel: When the Chinese expanded into the islands in the South China Sea and used them as military bases, people in the US began to worry. And when China was a small economy, we did not complain so much; but when Chinese companies became much larger, it made a big difference.

It was because of China’s increased power and increased military budget that made it more worrisome. Every country’s military must always be prepared for emergencies. This has made the US military more determined to find new responses in case the Chinese military resorts to force to solve the Taiwan question.

It was not only a response of politics, but a realistic response of the US to the change of China’s position in the world. In the beginning, people in the US thought we were so powerful. But when the rival begins to get close, we get more concerned and we respond more strongly. This is what really increased concerns for the Trump administration. Not only Trump, the Democratic politicians have also in general become quite strong.

There is now a debate about how to respond to China in the US. Even within the Trump administration, there are different views. We must work with China, but in what way? How can we deal with the pressure? Most people working in economics will understand that tariffs cannot really help. They caused problems but did not help. We have realized that the trade war was not helpful.

But still, China has taken American companies’ intellectual property with a purpose of modernizing their country. It is not unusual for a country to behave this way. We thought the same way about Japan in the 1980s. When a country is developing, they do whatever they can to modernize.

Politicians in the US sometimes try to appeal to the public to get elected. As a result, sometimes they take things very strongly. I think this is a political phenomenon that we can understand. The public discussion sometimes exaggerates the reality and real situation.

This is why some of us feel that it is not fair to say there is a consensus that we should be separate from China. It is true that we should defend our interests, but we must work with the Chinese.

There was an article a year or two ago saying that US engagement with China does not work. I think it was not accurate, because engagement has already worked, and China has changed a lot. For example, China has done so much to join international organizations, and the US has showed welcome. China sent so many people abroad to learn about international rules and it did make adjustments.

The world now is so interdependent. We can’t have a detachment, and we should find the way to work together.

GT: In July 2019, you signed an open letter to President Trump titled “China is not an enemy,” calling for reexamination of US policy toward China. After half a year, have any substantial policy changes been made?

Vogel: All those who signed the letter are well-known people who have had an important responsibility. They are experienced, knowledgeable and respectful. I think our letter helped change the debate. People now do not say, “There is a consensus that we must be tough with China.” More people are now saying we must learn to work with China.

We do object to some things that China does. But after all, China is a strong country and has businesses around the world – even more than the US does. And the world is too small to be separated. We have to learn how to get along with each other.

Policy is complicated because everything has so many different sides. It is true that some of Trump’s policies are one-sided. I don’t think his trade policy has been a good one. We should not raise tariffs so high. The two have already had a phase one trade agreement.

GT: An increasing number of people have realized that the US and China should not decouple. But some moves of the US are worrisome, in particular regarding high technology and academic exchanges. Based on your observation, do the US political elite and the general public differ widely in terms of China-US decoupling?

Vogel: I have not conducted an opinion poll for every American. I think the American public opinion has changed somewhat. I think in general the public opinion now is quite concerned about high technology. The whole world is going through new technical development, and we don’t have an easy answer.

Japan and the US are military allies, but we have been critical of Japan, too. There were times when their companies stole American secrets in 1980s. We were very upset about those companies. Even now, those companies and the Japanese government do not always make themselves open to American firms. Generally speaking, Japanese are very self-disciplined, but I think the Chinese are getting more self-disciplined too.

The general public doesn’t know enough about the China-US decoupling and they are worried about it. But for those who are informed, we believe the decoupling is impossible. In some cases the two countries may be decoupled, but the decoupling will not take place in a big way.

GT: Some US media outlets raised a question: “If President Trump is a one-term president, will the next administration take a different position with China?” What is your view on this?

Vogel: We don’t know. But I think if Trump is defeated, the next administration – even though it is critical of China in the campaign – will have to come to terms with China and learn to work with China, because we are in the same boat.

GT: Is there a win-win solution for the US and China?

Vogel: There is no simple solution. I think the solution requires hard work and a lot of understanding. Officials of both sides should understand the situation and try to come to an agreement, which needs continuous efforts. China and the US are in the same boat, so we must work together.

GT: You are an expert on both Japan and China issues. Have you compared the two countries? How can they learn from each other?

Vogel: For the Japanese, the main thing they do was to make it difficult for foreign companies to establish power in Japan. They protect their own market and try to keep foreign firms out through various ways. We can accept some legal ways, but we believe many indirect ways are not fair. China is getting strong now. Similarly, some people in the US also think it is unfair that China has not shared its intellectual property.

In terms of mutual learning between China and Japan, Japan should find opportunities to work with Chinese companies in advanced scientific fields. China can learn from Japan about how to maintain a peaceful and stable domestic society and how to maintain good relations with other countries.

GT: How will China’s neighbors, such as Japan and South Korea, respond to China’s rise?

GT: Many Chinese have read your book Deng Xiaoping and the Transformation of China. Deng, then Chinese leader, once said: “Independence and self-reliance have always been and will always be their basic stand.” What’s your understanding of Deng’s governing philosophy?

Vogel: Deng was a wise leader who helped China move from the errors of the Great Leap Forward and the Cultural Revolution to a more open-market economy that has brought new technology and management skills to China and helped the country begin the path of rapid modernization.