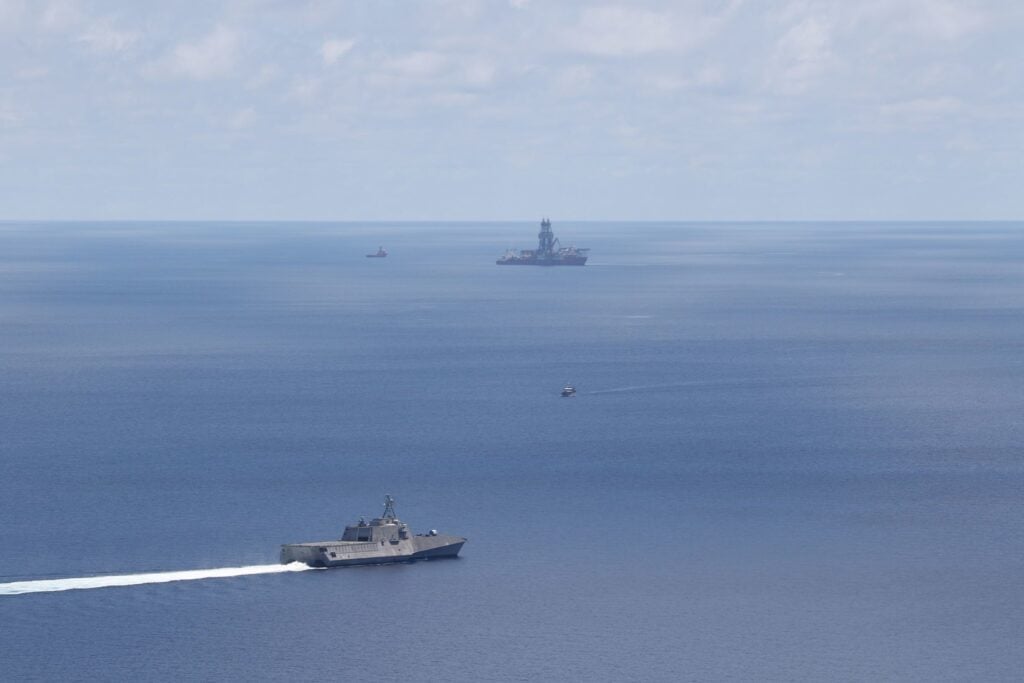 WASHINGTON: Two Navy ships sailed into the middle of a simmering dispute between China and a neighbor in the South China Sea on Thursday, shrugging off a shadowing Chinese warship in Washington’s latest effort to show presence in an increasingly contested waterway.

Pacific Fleet commander Adm. John Aquilino said in a statement the US is “committed to a rules-based order in the South China Sea, adding, “the Chinese Communist Party must end its pattern of bullying Southeast Asians out of offshore oil, gas, and fisheries. Millions of people in the region depend on those resources for their livelihood.”

The West Capella, drilling on the seafloor searching for oil deposits, has been drawing attention from Chinese fishing vessels and Coast Guard ships for the past two months. They “continued to harass the rig and its supply vessels. In response, Malaysian navy and law enforcement ships have been regularly patrolling the area,” according to the Asia Maritime Transparency Initiative, run by the Center for Strategic and International Studies.

The Navy released photos showing the Montgomery operating close to the West Capella, sending a message to China that Washington is paying close attention to its latest attempts to make a power grab in the region. In recent days, top US officials have complained that Beijing is taking advantage of the COVID-19 pandemic which has gripped the attention of world governments and flatlined the global economy. 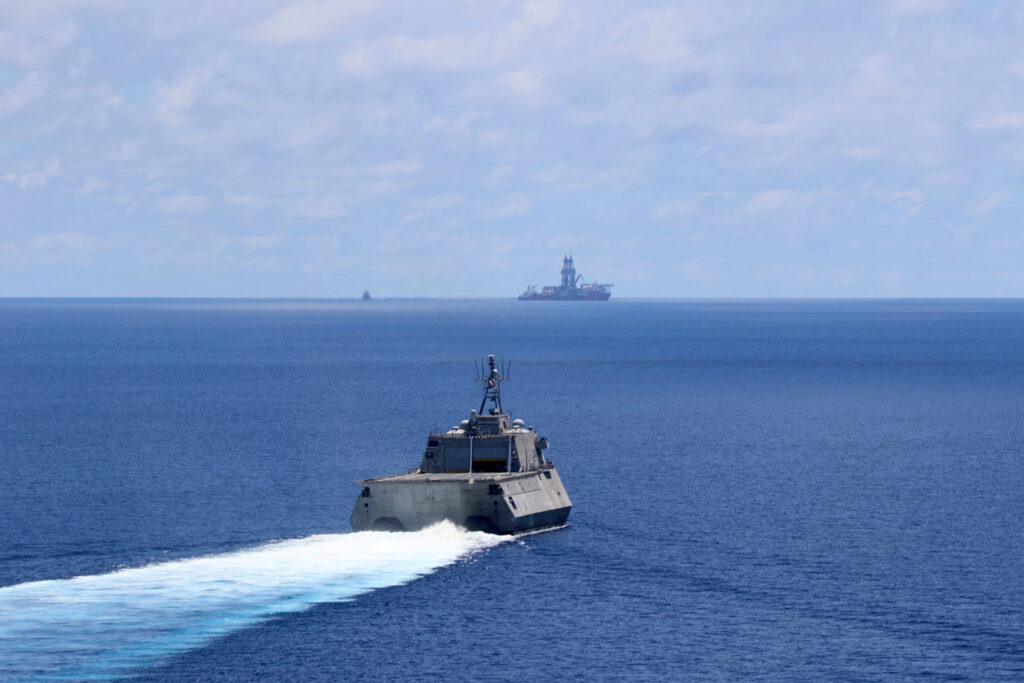 USS Montgomery approaches the West Capella on May 7.

Secretary of State Mike Pompeo said recently that the US “strongly opposes China’s bullying,” charging, “the Chinese Communist Party is exerting military pressure on Taiwan and coercing its neighbors in the South China Sea, even going so far as to sink a Vietnamese fishing vessel.  We hope other nations will hold them to account.”

“We continue to see aggressive behavior by the PLA in the South China Sea,” Secretary of Defense Mark Esper told reporters at the Pentagon earlier this week, “from threatening a Philippine navy ship to sinking a Vietnamese fishing boat, and intimidating other nations from engaging in offshore oil development.”

The Navy has taken to publicizing its operations in the South China Sea in recent weeks, likely as a show of commitment and strength after the USS Theodore Roosevelt aircraft carrier was forced into port in Guam with 1,100 COVID-19 cases among its crew. The ship has been pierside for about 6 weeks, and it’s unclear when it will resume operations as the only US carrier active in the Pacific.

On April 30, a day after the Bunker Hill’s transit, two B-1B bombers flew over the South China Sea.

The America, with a contingent of Marines aboard, operated in the vicinity of the Chinese survey ship Haiyang Dizhi 8, which was being escorted by Chinese destroyers, a frigate, and several coast guard vessels. The ship had been shadowing the West Capella for weeks.

Rear Adm. Fred Kacher, commander of Expeditionary Strike Group 7, added in a statement that the “USS Montgomery’s operations with the USNS Cesar Chavez highlight the flexibility and agility of our naval forces in this vital region.” In what was likely a nod to the Roosevelt being out of comission, he added, “our forces fly, sail and operate in the international waters of the South China Sea at our discretion and in accordance with maritime norms and international law, demonstrating the wide range of naval capability we have available in the Indo-Pacific.”